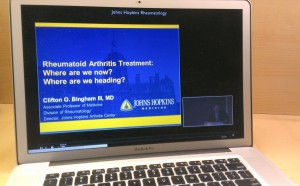 This year we are excited to offer the opportunity to attend the Rheumatic Diseases course online. What does this mean? Simply put, you’ll be able to fully participate in our course from anywhere in the world. All you’ll need is a computer and a broadband internet connection.

Our online option will include live video streaming of each lecture, panel discussion and case presentation. Attendees will have the ability to:

We recognize the cost of attending a face-to-face meeting can be costly and time consuming. That’s why we’re so excited to now offer a live stream option!

To receive credit for attending the event, participants will be required to submit their evaluation and post-test by COB on April 12, 2014.  Mechanisms will also be in place to verify attendance.  There are no pre-requisites to attend.

In the event of technical difficulties, the activity will be available immediately after the live sessions.

You have Successfully Subscribed!

Use of this Site

All information contained within the Johns Hopkins Division of Rheumatology website is intended for educational purposes only. Physicians and other health care professionals are encouraged to consult other sources and confirm the information contained within this site. Consumers should never disregard medical advice or delay in seeking it because of something they may have read on this website.

Rheum.TV is an educational platform created to help patients living with a rheumatic disease. With over 100 disease education videos produced by the team at Johns Hopkins Rheumatology.